Biscuit And Gravy: The Southern Delight 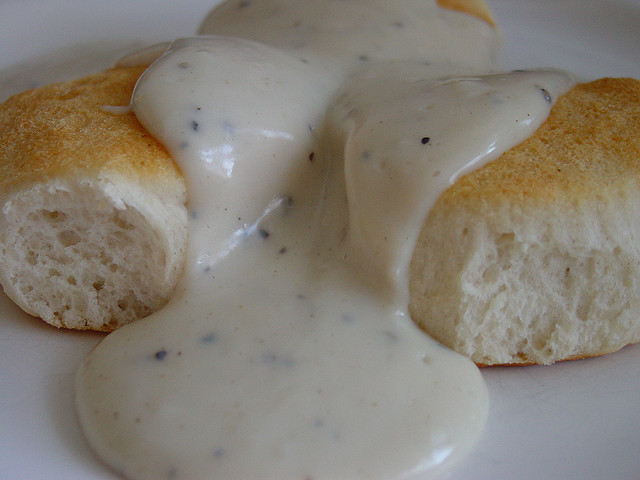 The 2nd week in September is National Biscuit and Gravy Week! A classic dish, the recipe is a typical Southern States American breakfast dish which oozes great textures and flavors. Although the “biscuit” is totally different to what most British people consider a biscuit to be, this is no less delicious and a great brunch time treat.

Essentially, It consists of soft dough biscuits covered in thick “country” or “white” gravy, made from the drippings of cooked pork sausage, white flour, milk, and often (but not always) bits of sausage, bacon, ground beef, or other meat. A biscuit has a similar texture to a scone but is a savory version of this crumbly roll. It’s reasonably simple to make too:

Various gravy recipes exist, but one of the most delicious (and easiest too!) is a sausage recipe:

Fry the sausage in a frying pan until it’s cooked through. Pick the sausage out with tongs or with a draining spoon.

More recipes for biscuit and gravy

Although sausage gravy tastes great, it might not be for everyone. You can also make a milk gravy using bacon grease if that sounds more appealing! For a vegetarian option, you can try using veggie sausages, or even chocolate gravy if you have a sweet tooth.

Overall, the biscuit and gravy dish is a very indulgent treat, though eaten often in the Southern states. But it’s so tasty that even you shouldn’t hold back with your lashings of gravy this National Biscuit and Gravy Week!

Find more recipes for biscuit and gravy on Recipebridge.