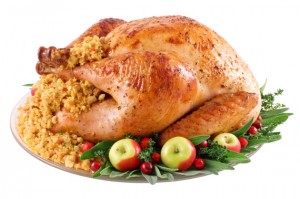 Traditions around the Christmas roast turkey

Amazingly, Turkey’s have been around for over 10 million years and were originally from Mexico. Although the eating of the turkey was made famous at Christmas by King Edward II in England, it was not until the 1950s that it became more affordable to the average person. Nowadays, the Christmas roast turkey is a major part of the Thanksgiving and Christmas meals.

In many places around the world, the consumption of a Christmas roast turkey is found to be the social norm. However, before Kind Edward II and Henry VIII first eating it during the festive period, people in England would eat a boar’s head or a goose. 1526 was the original year that the birds came to England, and they soon became popular with the upper classes because of their beautifully juicy texture.

In Victorian England (when England was ruled by Queen Victoria), other meats such as roast beef, rabbit  and goose were eaten by the working classes, whilst the poultry (chicken and turkey) were only affordable to the wealthier classes. Before this time, the richer people in England would dine on swan, pheasant, and peacocks on Christmas Day.

One of the main traditions surrounding the Christmas roast turkey is the pulling of the ‘wishbone’. When the turkey has been roast and carved, the Y shaped bone can then be removed from the turkey and then pulled apart by two people. The person who gets the biggest half then can make a wish!

Alongside the Christmas roast turkey there are traditional side dishes that accompany it including roast potatoes, parsnips, stuffing, sprouts, pigs in blankets and gravy. The key to cooking the turkey to perfection is calculating the weight of the meat and then adjusting the length of oven time accordingly. You can find many such recipes on Recipebridge.

Getting your Christmas roast turkey cooked to perfection is one thing, but it is an entirely different thing to think up ways to use the turkey in the days following Christmas. A lot of the time, people make turkey and stuffing sandwiches on Boxing Day, but if you have so much left over, there are plenty of options for what to do with it.

An After-Christmas Turkey Potpie is a massive hit with families all over the globe. It not only means that you can use up your leftover Christmas roast turkey, but you can also put your leftover veggies to good use too!

Similarly, a Day After Christmas Turkey Wellington also is a great way to use up all your leftovers and is the perfect meal to serve all your Boxing Day dinner guests who you didn’t manage to see the day before. The only problem with eating so much turkey is that by New Years Eve, most people will be sick of the sight of our Christmas roast turkey and will have overindulged so much that they just long to eat a green leaf salad.

Find recipes for Christmas roast turkey and side dish recipes on Recipebridge.