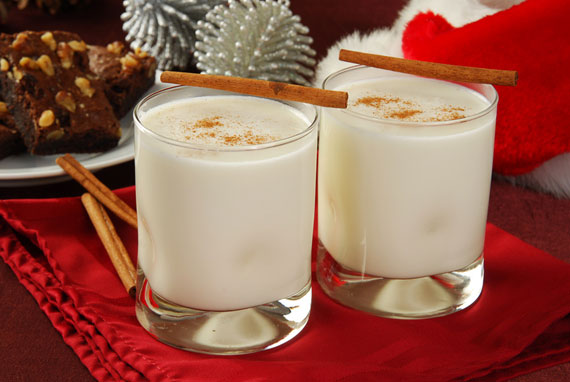 Originally, eggnog was a European festive drink that was brought over to America by the original settlers who had been putting milk and punch together for years. Back when it was first being consumed, the drink was held in a wooden cup called a ‘noggin’. The egg drink was then mixed and served in the noggin, which is where the name ‘eggnog’ came from.

The reason for its festive uses at Christmas is for quite simply the fact that its main ingredients provide a very ‘Christmassy’ and warming taste – especially when served hot! As it has been around for so long, it is the quintessential Christmas beverage that is designed to warm you up on those cold winter’s days.

The key ingredients that go into an eggnog recipe are eggs, sugar, and milk. A vanilla pod can be added to give the flavour more depth, and certain spirits are always used, although the quantities themselves vary from recipe to recipe.

Brandy, rum and whiskey are some of the most popular tipples to go into a traditional eggnog recipe, although it usually is just one of these at a time! George Washington, America’s first president, famously loved the drink and even concocted his own version that used three different types of liqueurs at once; rum, sherry and whiskey! To add a little extra flavour to the glass of eggnog, a few fresh cherries can be scattered into the bottom of each glass that you serve and then sprinkled with cocoa powder.

The rich flavours of eggnog can be a little too much for some people, so if you want to try your eggnog in moderation or in a different form then try looking at the array of recipes for eggnog desserts, pies and punches on Recipebridge. The iced eggnog cookies are a firm favourite of mine and are a great way to get the eggnog taste involved in your Christmas holidays without being overwhelmed by it. They are so easy to make and are great to share with friends and family as you open your Christmas presents.

If you are looking for a more sophisticated dessert, then why not try the Eggnog Tiramisu? It’s great for coffee lovers and offers just the right amount of eggnog flavouring to give it a bit of a boozy kick.

If the ‘boozy kick’ sounds like your perfect festive treat, then you will love the Eggnog Martini. It’s the cheat’s way of making eggnog, but that’s why we love it! All you need is vodka, eggnog, frangleico, crushed ice and a little nutmeg. The concoction can easily be shaken together in a cocktail mixer and then all you have to do is serve.

Coffees, hot chocolate, trifles, cheesecakes, cocktails and French toast all have eggnog varieties which make them ideal for consumption before, during and after Christmas. So don’t hesitate – start experimenting with your eggnog recipes – you will fall in love with the stuff. Feel free to Facebook or Tweet us about your favourite eggnog concoctions as well!