Home / Recipes / A Lamington This Week!

A Lamington This Week! 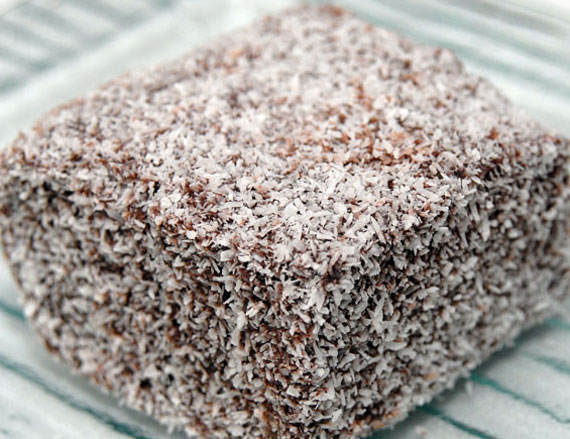 A lamington is a traditional Australian sponge cake, usually covered in chocolate icing and sprinkled with coconut shavings. They originated in Australia and have since become one of the most traditional desserts from down under.

Lamington cakes are small cubes of sponge cake often layered with jam, smothered in chocolate and dusted with coconut. The lamington was named after Lord Lamington (Charles Wallace Baillie) who was the governor of Queensland from 1895 to 1901. Lord Lamington often wore homburg hats which were a type of hat similar to the trilby, but with a slightly squared top of the hat, however he never famously showed any love for the dessert itself.

National Lamington Day is celebrated on 21st July in Australia and is a chance for Aussies, New Zealanders and indeed anyone else to try making this traditional sweet treat. Whether you decide to opt for a traditional, large cake or many mini ones, the lamington is a great way to celebrate Australian cuisine.

How to make a lamington?

The traditional lamington can be made with 6 eggs, 1/3 cup self raising flour, 2/3 cup caster sugar, ½ cup plain flour and 1/3 cup corn flour. Begin by greasing a square cake tin with butter. Beat the eggs until creamy in texture then mix in the sugar. Fold in the sifted flours then evenly spread the mixture into the tin and bake at a medium heat for half an hour. After this time, place on a wire rack to cool.

To make the icing, get 4 cups icing sugar, ½ cocoa, 2/3 cup milk and 15g melted butter. Sift the cocoa and the icing sugar into a heat proof bowl and stir in the milk and butter. Stir the mixture of a pan of simmering water. Cut the cake into 16 squares and dip them in the icing. Allow excess icing to drip off and then roll the pieces in the coconut until all sides are covered. Leave to set on a wire rack.

If you are looking for an even easier way of making lamington, then you could pre-buy two sponge slabs, add a layer of jam on one and place on slab on top of the other. This is easier if you are short of time or if you aren’t very experienced at making sponge cakes…Otherwise, this is a great recipe for everyone to try and can be a great one to do with the kids! You can find more recipes on Recipebridge.

Benjamin Christie’s more alternative recipe offers a variety of additional flavours to the traditional Australian dessert and is an ideal recipe to try if you are looking for something new that will impress your dinner guests. This recipe features wattleseed cream and rosella jam which add a whole new level of flavour for the lamington.

So if lamington sounds like your thing, then give it a try! Recipebridge features many lamington recipes. It’s sweet and delicious and you are guaranteed to fall in love with the rich flavours and variety of textures a lamington can feature.