The National Day of Overindulgence 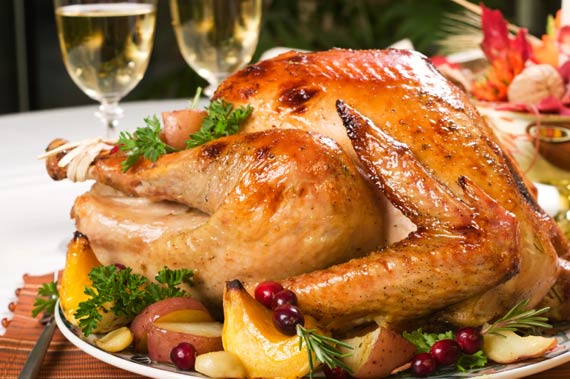 The National Day of Overindulgence – Thanksgiving, of course!

Every year in the United States on the fourth Thursday of November, families and friends come together to give thanks and share big meals and recipes as part of the massive tradition of Thanksgiving. The idea of ‘giving thanks’ was traditionally people showing how grateful they were to God for a good year’s harvest, and if the harvest had truly prospered over the season, it is no wonder so many people overindulge at this time of year!

The first Thanksgiving was held in 1620 when a group of Puritans from England set sail on board the Mayflower, a ship that held just 102 passengers. These passengers became the settlers now referred to as the Pilgrims, and after a harsh first winter in the ‘New World’ as they called it, the Native American Indians helped them plant their crops. After a successful harvest, the Pilgrims and Native Americans sat down to the first Thanksgiving feast.

So the tradition of eating a lot has been a major part of Thanksgiving ever since the first Thanksgiving all those years ago. If you really want to soak up all that tradition, then making the customary Thanksgiving dinner is essential.

A traditional Thanksgiving dinner usually includes a turkey plus many side dishes such as dumplings, yams, stuffing and of course, cranberry sauce. Pies are popular choices for desserts and depending on how extravagant the cook is feeling, more than one might be served at the meal; this could be apple pie, sweet potato pie or pumpkin pie – whatever it is, the diners are sure to have a great time tucking into all the food!

If you are looking for a modern twist to spice up the traditional Thanksgiving dinner and you feel like trying something new, there are many recipes that have great adaptations of traditional dishes. These can include tequila pan gravy, or if you want to try a more Gourmet-style take on the menu, you could try sage and cranberry crab cakes as an appetizer and pumpkin gingersnap cheesecake for dessert. (Yum!) Find these and more scrumptious Thanksgiving recipes on Recipebridge.

Thanksgiving is a massive culinary adventure for people all over the United States and beyond. Preparations can either start at the crack of dawn on Thanksgiving Day or can start days beforehand. Whenever you do start to prepare, you of course have to make sure everyone is catered for.

Tip 1: Ensure you have enough food and get people to help if you don’t think you can manage the workload.

Tip 2: It is also important to know if there will be any vegetarians dining with you in which case get your pumpkin pies and veggie casseroles at the ready – not only are these great, but healthy versions can also be found for anyone who is feeling conscious of the calories!

Once all your preparation is done and your food is on the table, just enjoy yourself and overindulge – after all that’s what Thanksgiving is all about, isn’t it?