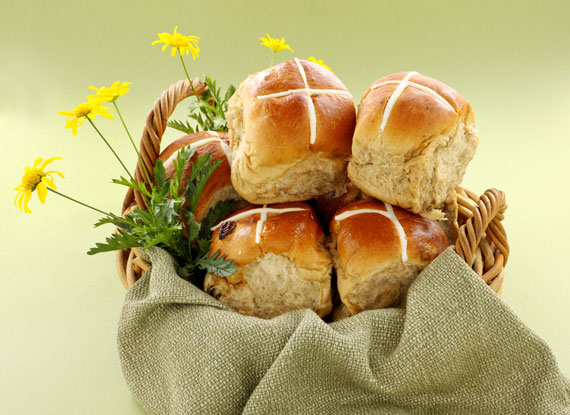 Hot cross buns are English sweet, doughy rolls (sometimes containing currants) with a “cross” shape etched into the top of the dough using a knife or piped on with icing or pastry. Once, these lovely buns were only eaten on Good Friday, but now they are associated with the whole of the Easter period and consumed by many on a regular basis!

The cross is said to symbolise Jesus’ crucifixion and the bread is also said to be symbolic of the ‘Body of Christ’. In England, hot cross buns are traditionally eaten to mark the day of the crucifixion, it was a traditional street cry of bakers that used to sell these buns on the streets of London in the 18th century which was later developed into an English Nursery Rhyme.

The first reference to the “hot cross bun” was in Poor Robin’s Almanac (a satirical written series) in 1733. Although some say the buns were created to by pagans to worship the sun, Queen Elizabeth I passed a law that only allowed these spiced buns to be eaten at funerals, Good Friday and Christmas Day.

The oldest hot cross bun in the world is said to have been baked in 1821 on the date of Napoleon’s death, and another still exists in Suffolk that was made in 1899.

On the site of The Widow’s Son pub in East London, there used to stand a house where a widow lived. The widow’s son was in the navy and asked her to bake him hot cross buns for his arrival on Good Friday. The son never returned, and as a tribute, the widow baked another bun in memory of her son every year and hung them from the beams in the house. This is a tradition that has been continued into the present day by the pub owners and the Navy as a mark of respect.

The largest hot cross bun in the world was created in 2011 and was made up the equivalent of 2300 individual buns and used a whopping 115kg bun mix, 2kg sugar for the glaze, and 23kg of mixed fruit. How did they find an oven big enough??

Traditional hot cross bun recipes involve using dried fruits and syrup as a glaze for the top, however, newer and more exciting recipes are beginning to surface around the Easter period, so if you want to try something a little different, why not try Earl Grey and Mandarin? Or dates and cranberries? Or even cinnamon and raisin? The possibilities are endless!

Find many recipes of hot cross buns on Recipebridge.