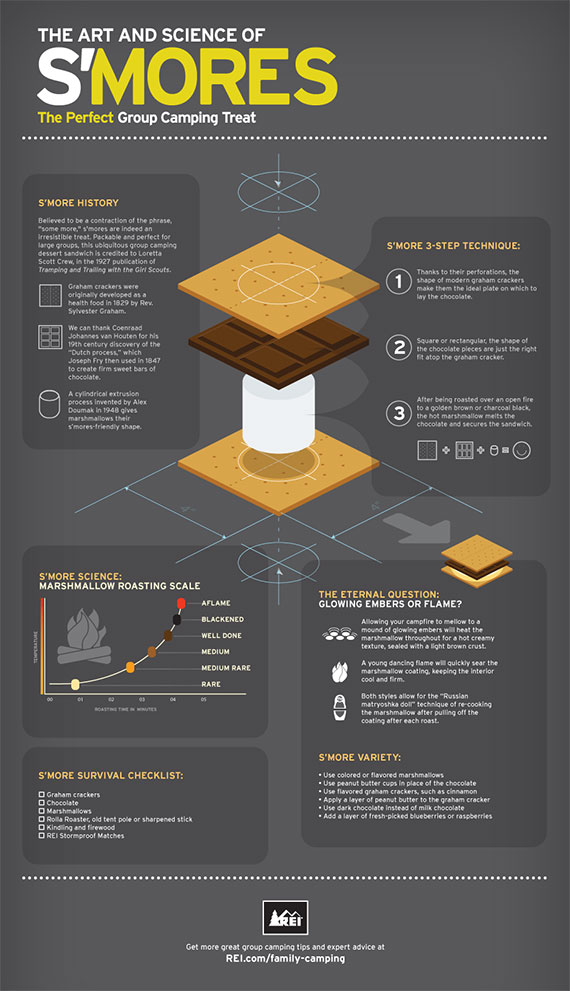 The gooey goodness of s’mores

Today we celebrate the National S’mores Day! Here we came across another fun infographic from Visual.ly about this super fun favorite. S’mores are a  fun and delicious campfire snack, essentially made of just three basic ingredients:  graham crackers, marshmallows and chocolate. The first official recipe for s’mores was published in 1927 in the Girl Scout Handbook. Though it is believed that this fire side tradition started much earlier to develop s’mores into a favorite fire side dessert. And since you’d always want ‘some more’ of this decadent dessert, it was called s’mores!!

The simplest s’mores recipe is as depicted in the infographic above. Take a graham cracker, add a piece of marshmallow, and chocolate, top with another graham cracker and melt this contraption either on open camp fire or in the microwave. However, the popularity of s’mores has soared so much that many variations are now tried and tested beyond the basic s’mores. Here are some recipe ideas on adding that twist to the s’mores recipes.

So why not camp out this summer night and enjoy the gooey s’mores treats! Find more s’mores recipes on RecipeBridge.